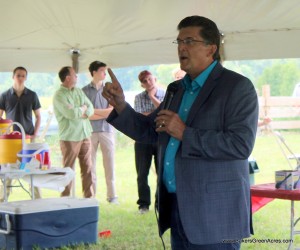 We had a fabulous day for the Constitution Hall gathering in July.  About 275 folks made it to the farm to hear Sheriff Richard Mack, eat some good food, and enjoy some time on the farm.  Unfortunately, KrisAnne Hall was unable to make it as her flight was rescheduled until too late to attend.  However, Sheriff Mack shared with us (hear his whole talk here)  the importance of holding our elected officials, and unelected bureaucrats, to a Constitutional standard.  The local government, especially the Sheriff, has the Constitutional ability and right to stand between the citizens and a power hungry state and federal government and provided a check and balance.   There is not room for “interpretation” within that because interpretation is subjective and tends to lean the way of power and money at the expense of you and me.   The men who penned the Constitution were well aware of how that worked.  They had enumerated the losses of liberty they’d suffered under King George when he denied them their British citizen rights 10 years earlier in the Declaration of Independence.  I’d encourage you to watch KrisAnne Hall’s you tube video on the history of the Constitution because it underscores the critical necessity of maintaining those rights, “at any cost.”  Mark successfully defended our right to farm because the Constitution protects private property, protects us from unreasonable fines, and protects us from capricious and subjective laws.  If you desire good quality, wholesome, health promoting food or just desire to have your children and grandchildren enjoy the freedom and opportunities you’ve had, it is imperative that you refresh your knowledge of your rights and learn how to wield that sword.

When approached by a government official you have certain rights:

2)      Even with nothing to hide, don’t talk to them.  They are trained to trap you into giving them “probable cause.”  Be a member of Farm to Consumer Legal Defense Fund, then, if something ever happens, call them and let the official talk to your lawyer.

3)      Local level officials, in particular,seem to like to make you jump through hoops subjectively.  Demand that they produce a written ordinance, law, or rule to back up what they are demanding you do.  We’ve experienced that more often than not, they can’t back up their demands and their threats “if you don’t comply” are empty.

Lastly, we are in an election cycle this year.  TALK to the people who want your vote.  Ask them about the Constitution.  In our primary, there is one candidate who can reference the Constitution when talking about how he’d vote on issues.  There is another one who talked about how a person’s stance depends on one’s “interpretation” of the Constitution.  This lawmaker also has a record of not voting for the people but rather for his party.  The third candidate didn’t care what we thought and has simply thrown lots of money at negative ads and has a history of lining his business’ pockets at the expense of taxpayers.  You pick.  Ask hard questions and line up the answers in light of the Constitution and the Bill of Rights.  This applies across party lines, because neither party likes these hard questions.  As Sheriff Mack said, see if the candidate who wants to represent YOU can say “Constitution” without blinking.

By the way, the pork was fabulous, the turkey (from what the boys raised for sale last year) was great, and the salads filled in the gaps.  Many thanks to Tammy Hyatt and her crew for helping us with the food!