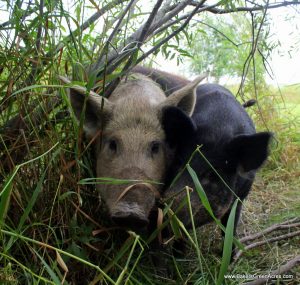 Two days ago there was a farm break-out of Chicken Run proportions.  In fact, there is evidence that Ron McKendrick’s intelligent and resourceful pigs had hidden bunkers and planning rooms.  They had begun construction on at least 3 tunnels out of his farm and finally finished one during the night a couple nights ago.  They had developed a sophisticated system of digging beneath ground while co-conspiritors did pig-like things above ground, including digging wallows, eating corn fed them by the farmer, and sleeping.  There was evidence they were redistributing the dirt on the ground and disguising it by rooting it into existing areas.  Apparently, despite a 16 year record of secure containment of its residents, a few of the hogs were inspired by the recent DNR inspections of their facilities.  They’d heard rumors of 1000’s of their kind running rampant through the woods, destroying farmland and farm equipment, spreading at least 30 different diseases, and terrorizing small children.  They thought perhaps they’d missed out on something and so, despite relative contentment in their current domicile, they hatched this plot to go find their fellow feral pigs and inflict mayhem on Michigan.

Unfortunately, rumors of the “Shoot on Sight” rules hadn’t also reached them.  As soon as word of their escape reached the farmer, help was quickly mobilized.  One pig succumbed to the farmer’s enticements and returned to the farm.  Five were taken under the shoot on sight rule.  Two made connection with their outside accomplices and are resisting capture.  They were tracked by dogs to a nearby road, where the trail ended.  It is hypothesized that they made their escape in a homemade, methane powered vehicle–or were assisted by aliens.

Tongue-in-cheek fun aside, the irony of contented pigs of any breed digging a 3 feet deep hole overnight (Renegade Ranch’s fences are buried 2 feet) and all leaving their beds to roam the woods, and the implication that the farmer allowed them to do so (see Ed Golder’s comments in the second article), is a bit much.  The two unaccounted for pigs were tracked by the dogs to a nearby road–and there the trail ended.  At a road.  These are the two pigs for which Ron McKendrick will be charged with violating the judge’s order that no pigs leave his property.

Here’s the report by MIRS:

Pigs On The Lam
The Cheboygan County hunting ranch that is being sued by the state for not letting conservation officers check for illegal swine on it property, had an eight-pig breakout Tuesday afternoon, and owner Ron McKENDRICKisn’t convinced they were acting alone.”Somebody helped us get a hole under our fence. I think a person started it and the pigs finished it,” said McKendrick of the Renegade Ranch Hunting Preserve.In total, eight pigs escaped. Five were shot by neighbors and surrounding property owners. One was captured alive, and two are still unaccounted for.
“It’s certainly a concern that we have that animals in captive facilities can get out, and when they get out they pose a serious threat to the environment and agriculture as well,” said Department of Natural Resources (DNR) spokesperson Ed GOLDER.The DNR and McKendrick are going head to head in a lawsuit over McKendrick’s swine (See “DNR Sues Ranch; Owners Allege DNR ‘Harassment,'” 4/10/2012).And this jailbreak will be another matter for the courts.”It’s a violation of the judge’s order that Mr. McKendrick not allow any animals off his ranch,” said Golder.

Both Golder and McKendrick told MIRS that the Cheboygan County Sheriff got involved when neighbors and property owners started calling about the swine.

McKendrick himself was alerted while he was in town. A neighbor gave him a call and he immediately went home, got corn out to try to bait the hogs back, and assembled a handful of men with trucks and dogs to try and reclaim his herd.

Golder said the DNR was investigating how the hogs got out. But McKendrick is suspicious.

“I’ve had the place for 16 years and I’ve never had a hog get out of here before. Now all of a sudden this is on the news and the media and all of a sudden I have pigs get out,” he said.

Here’s the story as reported by the Cheboygan Daily Tribune:

As many as eight Russian boars escaped from a Cheboygan County game ranch on Tuesday, one or two of which are still roaming freely.
The Renegade Ranch, a fenced in Cheboygan County game ranch, was the operation from which the swine escaped. The ranch and its owner Ron McKendrick have made headlines recently for a legal dispute with the Department of Natural Resources over his right to keep Russian boars, which the DNR considers an illegal invasive species, on his property.

“This escape certainly demonstrates our concerns over invasive species being kept on private land,” said Ed Golder, Department of Natural Resources public information officer.
Shortly after escaping, five of the boars were killed by private property owners. Another was captured, but one or two are still at large, according to Golder.

As far as the implications for Renegade Ranch, those are yet to be determined. The DNR has sought and received an June 1 court date for a show cause hearing where the department will contend swine escape from McKendrick’s property violated a court order issued during a April 20 hearing.

According to Golder, the court order required McKendrick not allow any swine leave his property unless they were going to slaughter and the DNR be contacted before the butcher-bound pigs were transported.
McKendrick did not respond to messages left by the Tribune Wednesday.

Law enforcement officers are still investigating the circumstances that led to the escape.

This is the most recent layer in a multifaceted clash between McKendrick and the DNR.
In April, the DNR filed a civil complaint against McKendrick and his wife Charlene, citing the swine on McKendrick’s 300-acre game ranch as illegal to possess in Michigan as the result of the invasive species order. This eventually led to the court order that required McKendrick keep the swine on his property.

On May 10, DNR officers inspected the swine on Renegade Ranch.

“They looked at a few swine,” said McKendrick shortly after the DNR inspection. “We talked a little.”
McKendrick contended that his swine were not invasive by virtue of where they were raised.

“All my hogs are raised in a pen in Michigan,” he said. “I buy them from a guy in the U.P. As I understand it, something that’s raised in Michigan can’t be an invasive species.”
According to the DNR, the Invasive Species Order is applied based on the strain of pig, not where it was born and raised.