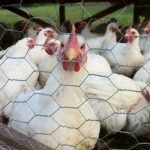 The chickens are in full production mode right now.  Our twenty or so hens are laying about 20+ eggs a day, and I know the Araucanas are not pulling their weight.  Chickens are a great place to start with livestock.  They are easy to acquire, easy to keep, and are generally accepted in most urban situations.  There are two basic types: broilers and layers.

Broilers are cornish hens crossed with another breed to produce the double breasted, fast growing meat bird.  They are not genetically modified, just very hybridized (specialized through breeding).  Every now and then we’ll get a genetic throw-back–either one that favors the cornish and stays small or (less often) one that favors the other breed crossed in with less breast meat and a touch of color in the feathers.  If you see “cornish hen” in the store, it is no longer a true cornish hen.  It is merely these cornish crossed broilers processed at 3-4 weeks of age instead of the 7-9 weeks it takes for a full grown bird. 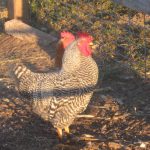 Laying breeds of chickens have a lighter breast and more dark meat.  They grow slower but are meant for egg production, not so much meat production.  They make fantastic tasting, super healthy meat, but don’t pack it on like the broilers.  They are more aggressive (not necessarily mean, just active) and can forage effectively for food.  They can thrive on what they forage, especially if you get an older “heavy” breed (good for eggs and meat).

Here are a few “fun facts” about chickens:

The record for multiple egg yolks in one egg is nine.

A chicken needs to eat approximately four pounds of feed to make a dozen eggs. 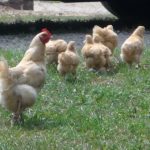 If a chicken has red ear lobes, it will lay brown eggs if it has white earlobes it will lay white eggs.

Chickens will lay fewer and fewer but larger and larger eggs as they grow older.

Chickens will lay more, larger, and stronger eggs… if they think the day is 28 hours.

The record for egglaying belongs to a white leghorn that laid 371 eggs in 364 days.

The world record for the most eggs laid in one day is seven.

Americans eat 80 pounds of chicken per capita, which is more than beef at 63 pounds per capita. That translates to about 8 billion chickens a year.

The longest recorded chicken flight was 13 seconds and a total distance of 301. 5 feet.

Chickens have a different alarm cluck for different predators.  They have about 200 different vocalizations all told.

The chicken has been domesticated for 8,000 years.

In 2007, researchers were able to extract small amounts of collagen protein from a 68 million year old Tyrannosaoures Rex leg bone. Further analysis confirmed that the chicken is the closest living relative to the T. Rex.

There are more chickens on earth than humans.

Hens are very protective of their young.  Being called a “Mother Hen” is a good thing!

A laying hen is called a pullet for about the first year of life.  Hens typically begin laying eggs at about 20 weeks of age.

Most hens lay for about two years, but can continue at a lesser rate until 3-4 years old.  They can live for a couple of years after that.

Hens require light to lay eggs.  Decreased winter daylight, as well as temperature extremes, stress, seasonal molting, or lack of proper nutrition can affect how many eggs a hen lays.

Come check out how you can have chickens in your backyard from start to finish! Follow this link to Anyone Can Farm: America’s Farm to Fork Academy.  The Courses page describes the classes and the Calendar page tells you when we offer the course and has a button to sign up.  We hope to see you here!