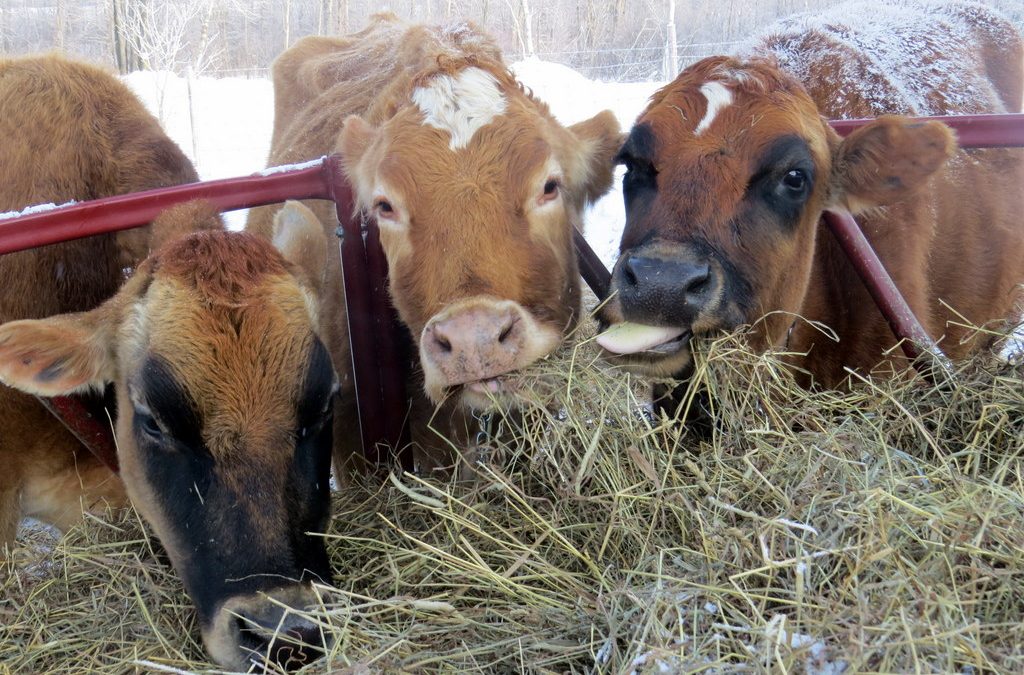 We learned an interesting thing about animal feeds this weekend.  If a label say “meal” or any such thing, the grain is a byproduct of some previous processing of it.  The particular one in question was soybean.  The mill we were at was grinding whole soybeans for their feed mixes.  It smelled wonderful–like someone cooking.  Mark said when he picked up a handful it was moist, smelled edible, and reminded him he had had a light lunch–it was tempting to taste it, too.  The fellow who runs the mill told Mark that animals perform much better with the whole grain.  Typically, animal feeds use soybean meal, which is the parts of the soybean left over when the oil has been expelled.  The remaining “meal” has much less flavor, fat, and overall nutrition compared to the ground whole soybean.  This makes sense as we know that when we consume a whole food you get more nutrition in a more useable form.  Why should it be different for our animals?  Another thing to experiment with!

In the same vein, we were talking with a friend who’s dealing with cancer.  As we talked, one topic she never mentioned the doctors discussing with her was diet.  From the snippets of naturalpathic/homeopathic writings and the quotes from various sources in Sally Fallon’s Nourishing Traditions there is significant evidence that a diet of whole foods eaten in moderation boosts the whole human system against such things as diabetes, cancer, etc.  Certain foods may also be linked to helping the body fend off certain insults–noteably cancer.  Pharmaceuticals have their place, but why do pharmaceutical practitioners not do more education about the benefits of eating foods closest to the forms in which they were created?  Living foods give life, processed, dead foods can not do so.

Which brings us back to our animal feeds.  The two conversations got us thinking (more, again) about what we feed and why.  We’ll have to see what more we can learn.