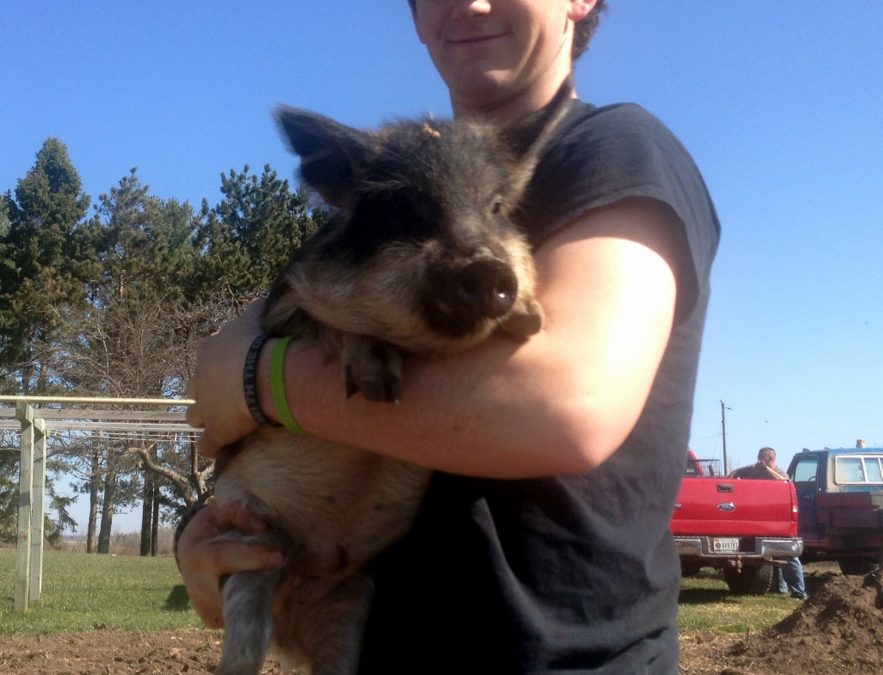 A legal update on the Michigan DNR and our Mangalitsa Pigs.

I realized I haven’t updated folks on our legal situation in a while.  Mostly that’s because it hasn’t changed much.

For those of you who are new to the story, I’ll recap a bit.

Two years ago in mid-December, we were delivering chicken to one of our chefs in Traverse City.  “I’m sorry to hear about your hogs,” he said.  “Um…what about our hogs?”  Apparently the local Michigan Department of Ag. Commissioner had gathered the area chefs and informed them that they couldn’t have a certain type of hog in their establishments because those hogs are now deemed illegal.  He told them that our Mangalitsa pigs were included in that because of how they look.  The chef at our next stop confirmed the event and information.  Mark did some more checking around and found out that the Michigan Department of Natural Resources had added certain types of pigs to the Invasive Species Order and had issued a Declaratory Ruling to help people understand which pigs were deemed invasive and therefore illegal.  We looked at the list of illegal pigs and said, “Could our pigs be ‘old world swine?'”  We consulted the characteristics (any one or more of which would make a pig of the illegal variety) and determined that our Mangalitsas (both the hybrids we have and the purebreds we’ve had) met 7 of the 9 characteristics.  You can read them all here.

Mark’s next move was to attend a meeting the DNR held to help farmers and ranchers understand how this applied to them.  The meeting consisted of a reading of the ISO and Declaratory Ruling and then, well, they refused to answer questions.  They told attendees to ask questions of a couple of officers in the back, but wouldn’t answer questions from the group.

The ISO and Declaratory Ruling raises many issues about due process under the law (how vague is “other characteristics currently unknown”), private property, private contracts, and jurisdiction.  The DNR is an administrative agency, and the best-funded agency in Michigan, possessing its own law enforcement division.  They are accountable to no citizens and have a reputation for showing contempt to citizens.  This saga started many years ago when the DNR went to the legislature and asked them to regulate the private hunting preserves because we had this problem of feral pigs in Michigan.  The legislature found that the Dept. of Ag. was doing an adequate job of regulating the preserves and dealt with pigs in the woods by passing the “shoot on sight” law, whereby any license carrying hunter (regardless of license type or season) could shoot a pig loose in the woods.  This didn’t satisfy the DNR because only ** pigs were shot.  They were sure there were a couple thousand out there.  So, at the behest of the Michigan Pork Producers, they gathered a working group and developed the Invasive Species Order addition and Declaratory Ruling.  The ISO and Declaratory Ruling were ostensibly aimed at private hunting but failed to define a “domestic hog production” while effectively describing every pig known as either a “feral pig” or a hybrid of it.  With no legal clarification (the DNR wanted us to simply have them approve our farm pigs) at hand, Mark sued the DNR for relief from the ISO and Declaratory Ruling.

After much legal wrangling, a change of lawyer, and the passing of valuable time, we had a hearing on July 12 regarding Motions for Summary Disposition from both sides.  While waiting for the judge’s decision, things weren’t behind the scenes.  When given the opportunity to be good guys and help us to make lemonade out of lemons (so to speak), the DNR chose to exact their total rights and take as much time as they are allowed (75 days) to learn all they can about our two expert witnesses.  Their game plan was enunciated by one of their lawyers during a hearing for one of the other farmers who sued the DNR.  One of their lawyers told the judge in Baraga:

“You know, when it comes down to brass tacks, Your Honor, the fact of the matter is yes, the intent of this Order is to put that business and nodding to Roger Turunen or Mark Baker or anybody else, but to eliminate that business, and, of course, we wait for the Courts to determine whether that Order is valid and legal, but, you know, there’s no getting around the fact that that is, indeed, what DNR hopes to accomplish.” (emphasis added)

They tried to put a disclaimer on it and say that Harold Martin didn’t mean to say they were trying to put us out of business, but their actions speak louder than their denials.  They are dragging our case out as long as possible, and are appealing the Baraga court’s injunction to allow Roger to do a fraction of his former business under extreme DNR scrutiny.  They can say what they want, but in a struggling they are seeking to “eliminate” businesses that could be stimulating the economy.  Vague, arbitrary laws have a way of squelching business rather than stimulating it.  Note that our Attorney General, Bill Schutte, and Governor, Rick Snyder, are both 100% behind the DNR on this capricious escapade.  (You can read more about this on the blog: “Update” and “Intentions.”)

Most recently, the Attorney General, Bill Schutte, via his , has been up to the old tricks again.   Judge Fagerman had, after much deliberation, handed down his opinion.  He conceded some points to the A.G. and DNR, and other points to us.  There were a couple of points in which he felt there was enough vagueness that a trial was needed to bring the details to light.  After more stalling by the DNR and AG, we have a planning meeting to establish the trial date on October 30.  In the meantime, they’ve shown their contempt for the judge and their “chicken” stripe by making a motion for the court to reconsider the opinion.  They have no new information to bring to the table, they simply want the judge to rethink his position.  I can only conclude that they are afraid to allow this case to go to trial.  They seem to have a low opinion of the people of the county because they strongly resist any request for an Advisory Jury trial.  Their tactic, rather than explain in a logical and reasonable and persuasive manner how their law is Constitutional and logical and reasonable, is to add delay to delay and avoid the hard questions and ignore the citizens who pay their wages and force out, squash, intimidate, and eliminate anyone who has the fortitude to question their logic and reasonableness (and don’t even mention the Constitution).  Here’s Mark’s latest video on this topic:  The DNR’s latest move.

The participation of everyone who has stood by us with their time, energy, and money has sent a message.  You have shown the people in Lansing and the courts that you are paying attention to them and are willing to invest in keeping your freedoms.  This is what seems to make in these kinds of cases.  The people who forget who they work for and seek to exert undo authority over us like to do so in the dark, not in the light of public scrutiny. Thank-you for the investment you’ve made in preserving your Constitutional rights, reminding the people we sent to Lansing (as we need to do with the people we seat in our county and Federal governments also) that our rights are divinely given and they are not the Divine, they only have authority as given by the People, and we are watching.