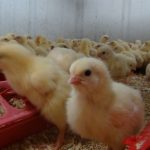 Anyone who’s raised animals very long can tell you that sometimes things go wrong.  They aren’t really “Acts of God.”  Things were designed to work a certain way and when it goes wrong it usually involves nature, as in “the nature of the beast” (literally).  Animals have a way of looking at the world, and when they become difficult it’s usually because we aren’t understanding their viewpoint and meeting their needs. (Temple Grandin is a proponent of this if you want to read about it elsewhere.)

Last night was a case in point.  Our youngest group of chicks is about 3 weeks old now.  They needed to transition out of the brooder, but Joe didn’t have space until Monday and needed to let the next pen dry off before he moved them.  They had sustained a couple of losses, but were generally doing well.  Then, Tuesday morning, Keith came rushing in: “I have a BIG problem!”  Apparently the thunderstorm the night before, or the humidity of the storm, or something caused these easily stressed birds to panic and they “piled.”  They climbed on top of each other seeking comfort, suffocating the ones on the bottom.  It can be ugly, but it’s their nature.

This started out as a group of 600 chicks.  By the time Joe and Keith got it sorted out and various ones had revived once rescued from the pile, Keith counted 169 dead.  Ugly doesn’t begin to describe the feeling.

They cleaned up and Joe moved the chicks into the next pen.  The chicks had been very stressed by now—big storm, moving, new and unfamiliar surroundings.  Then dark descended.  By their nature, they wanted the comfort of their big, solid walls and low ceiling.  This big, open pen scared them.  So they started to do what they do when looking for comfort.  They started to pile again.  The “Act of God” was that Joe, contrary to his nature, decided to check on them again after he was nearly in bed for the night, and came back over at 11:30.  We lost about 10 or so birds, but that’s all.  We gave them walls and a ceiling and rigged a heater.  That was all they wanted, after all.  We put more wood shavings over top of them once they settled in, shut the lights off, spread the last few who were determined to pile out to the edges, and said goodnight.  By their nature, they don’t move much during the night.  We’d provided the security they desired, with a little extra warmth to boot.  That was all we could do.

I’m happy to report that we lost zero chicks during the night.  At 6:30 this morning they were running around, chirping happily, drinking and eating and dust bathing.  They were in and out of their security area and generally looked very happy with life.  It doesn’t take much to be happy when your brainstem is bigger than your brain.  Those of us with the cognitive capacity just need to slow down sometimes and consider the nature of things, and go with it.

Now, Kimi the bull-who-climbs-through-small-holes-in-the-wall is a story for another day.