New Additions to the Farm

Lots of new things this week at Baker’s Green Acres farm.  We have new projects, new animals, and new housing for the animals we have.

New projects first.  The guys worked on erecting the clear span house we have for the chickens.  Last fall the building parts arrived about 2 weeks before the first snow–the one that stayed all winter. The plan was to get it up in November to extend our pastured chicken season a bit longer.  A plan is merely the starting point for change, right?  Well, this week they got the framework almost completed, in spite of the spring wind.  The goal for next week is to get the tarp on and have our batch of 350 birds in by the weekend.  The other new project was Joe’s aviary.  He’s going to raise pigeons.  The first one is about half way done and is at a point where he can work at it on his own.

In the new animals department, Dorothy received a birthday present none of us expected: a bum steer.  Actually, I’m not sure he’s a steer yet, but he was considered a bum and nobody wanted him.  Dorothy, however, likes furry animals (as opposed to feathered or bristled) and baby ones at that.  She mixes up his milk and feeds him twice a day.  He’s getting pretty mobile and a pen for him will be a necessity soon.

The chicks are getting big.  They are right on target to be ready for processing by the end of April. 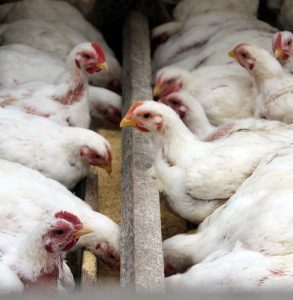 We want to get them into the clear span so they’ll be easier to protect at night while allowing them grass range in the day when weather permits.  One of these days it’ll be warm enough to put them in the tractors!  We look forward to that day.

That’s the new news on the farm this week.