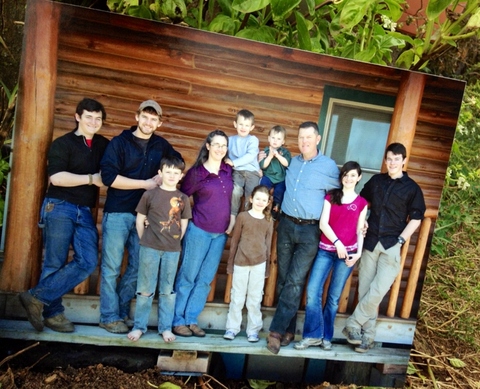 I hope this finds you enjoying the holidays and appreciating the Spirit of Peace that Christmas commemorates.  It has struck me many times over the past year that Christ is about peace, but he didn’t promise peace like how we humans first think.  It’s not peace treaties between nationalities, or family members reconciling, or even Powers-that-think-they-be leaving us to live life.  Those things come out of real Peace.  The peace he meant and that the angels sang about so long ago is a peace, a reconciling, a Life with the Power of the Universe.  Once we get that, the other things flow naturally from the peace we have with ourselves and the God of the universe.  And if they don’t, we are sad but not defeated.  Nothing on this earth can take that Peace away.

I say that from the vantage point of being where we’ve been, up, down, and everywhere in between, in the past year.  You’ve kept up to date this fall if you’ve talked to Mark or watched his videos.  I’m afraid I’ve been working in the shop and raising children and haven’t touched the computer significantly in a couple of months.  As far as the suit with the State of Michigan,  first we thought things were going well, though they won some points and we were awarded others.  Then the legislature pushed a bill through in 10 days that required the case to be moved to the state Court of Claims.  We would have started all over with a new, state appointed judge somewhere else entirely in the state.  That was bad news.  It would have extended our situation 6 months at the least and likely even longer.  We’d have been back to where we were in July.  The legislature realized that making the law active immediately for all pending cases wasn’t such a hot idea, so they passed another bill excluding all pending cases.  That’s good news for us, but not for anyone else who may have a problem with the state down the road.  Here’s one of Mark’s videos in which he explains the whole situation:  Some Good News.

news in all that legal mess is that we have been selling pigs to individuals by the half and whole.  We use an “old school” method of butchery, but it complements our pigs and enables us to provide a superior product.  Not a bit of the dark red meat and rich fat that is the Mangalitsa signature is wasted and we’re appreciative of the customers who have valued that product as we do.  These pigs are the antithesis of “the other white meat” from the moment they hit the ground, and we raise them to provide a nutrient dense food that your body can actually utilize.  Even the fat.  Especially the fat.  I wouldn’t have chosen butchery as a career, but I do enjoy offering people premium tasting, body building, “green” (good for the environment) food.  It’s a win-win all theway around.  So, that has been a bright spot this fall. 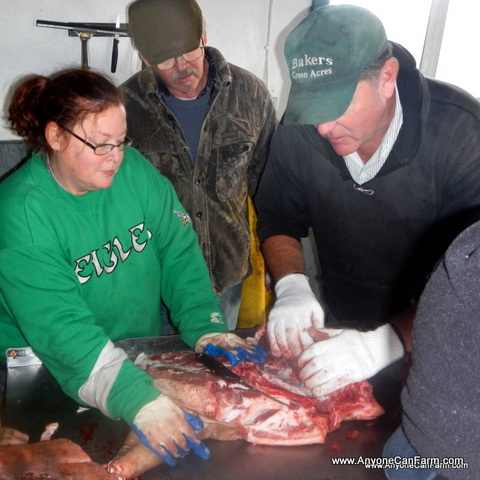 Another bright spot is our Anyone Can Farm program.  We conducted two fabulous classes this fall, teaching folks how to butcher a hog from standing in the field to curing hams and making sausage.  We also had a couple less formal opportunities for instruction as folks purchased a butcher hog and then helped process it.  Nothing makes you appreciate your food like helping to get it to the plate.  The Mother Earth News conference in Pennsylvannia this fall gave us one more opportunity to share this knowledge with folks as we did a hog cutting demonstration.  Mark and Joe got plenty of looks walking with half a pig each slung over one shoulder to the conference room!  I suspect that could only happen at a Mother Earth event.

Finally, you are a bright spot in our lives through all of this.  We appreciate our customers and Farm Exchange members because doing business and feeding folks is what we really just want to do.  We appreciate the folks who are too far away and support us with various gifts and prayers. Your faithfulness in these things has kept us going and, I believe, has made a difference.  We aren’t sta 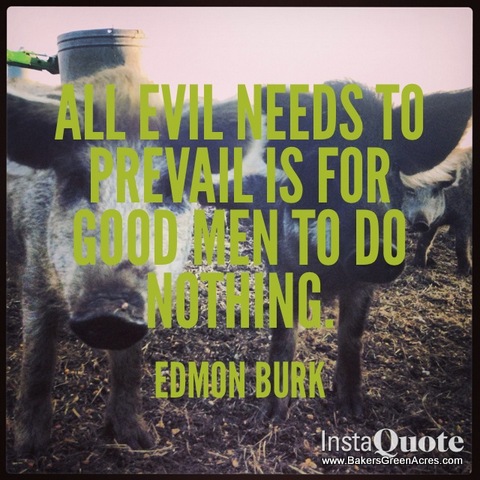 nding alone and that is a powerful message to the powers-that-think-they-be.  Thank-you for standing with us for freedom.  We look forward to new beginnings and better things in the coming year.

May you find the internal Peace that marks the holiday season is a part of your new year!