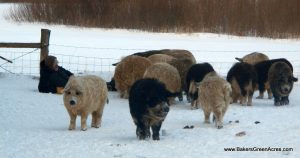 We recently joined a Facebook group focused on salt curing pork.  A book was brought up that has been added to my “books to buy” list.  It’s called Home Pork Making: a complete guide. , by A.W. Fulton.   If you follow the link, you can actually preview the book.  It was originally printed in 1911, so was penned in the era when our Mangalitsa pigs were the type of hog most folks had.  In the book, the author recommends feeding “flesh building feeds” like oats, barley, rye, and alfalfa.  He recommends staying away from corn as it only puts on fat and doesn’t allow the muscles/flesh to be in balance with the fat.  This is also before GMO corn, so no comment is made on the quality of the corn or how it affects the quality of the fat.

Another interesting quote is from the introduction:

“Hog killing and pork making on the farm have become almost lost arts in these days of mammoth packing establishments which handle such enormous numbers of swine at all seasons of the year. Yet the progressive farmer of to-day should not only provide his own fresh and cured pork for family use, but also should be able to supply at remunerative prices such persons in his neighborhood as appreciate the excellence and general merit of country or “homemade” pork product. This is true, also, though naturally in a less degree, of the townsman who fattens one or two pigs on the family kitchen slops, adding sufficient grain ration to finish off the pork for autumn slaughter.”

Keep in mind when this was written.  How much more true today!  By the way–are any of you living in a suburb or a town fattening a hog on family kitchen slops?  And think of all those recently who’ve fought just to have a few laying hens.  Those were the days!