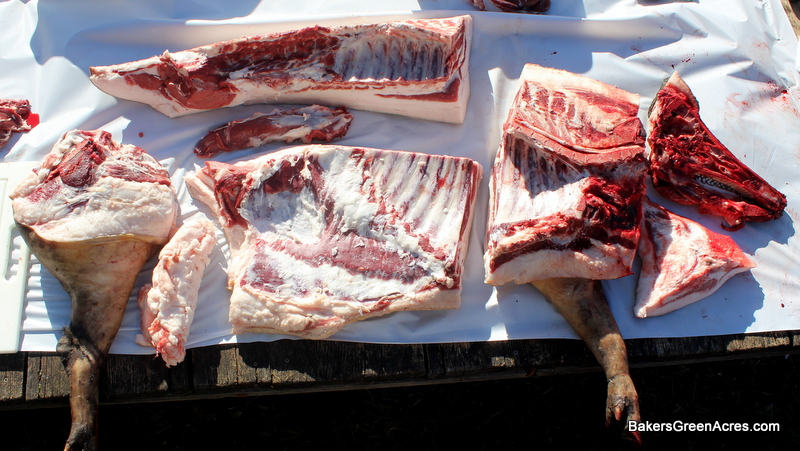 Recently we did a Hog Harvest class at someone else’s farm.  They had 4 pigs for the class to butcher: a Mangalitsa, a Red Wattle, and two white “farm pigs.”   It was an interesting comparison as all 4 had been raised on some type of pasture/forage and were about 9 months (give or take a little).

Once the hair was off, they were still distinctive in their skeletal structures.  Their faces were very breed characteristic, with the Mangalitsa having a long face, while the Red Wattle had a very short nose.  The teeth were another very unique part of each breed.  The white pigs had small teeth, almost baby teeth looking teeth.  The Red Wattle had strong looking teeth, but of medium length.  The Mangalitsa had long strong teeth with emerging tusks.  Teeth are a crucial beginning to the digestive system, and it was interesting to note how the two heritage breeds had teeth that were very capable of grinding and chewing (very necessary for eating forages).

Then the carcasses.  Each one showed where the particular breed’s strong points lay and reflected their environment. 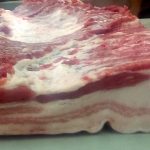 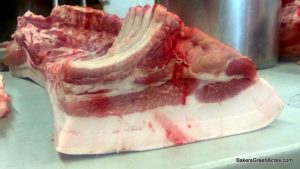 This is the belly and loin of one of the white pigs.  It has a nice fat cap over the loin for its breed.  Note the softness of the loin and the pinkness of it.  There were a lot of pork chops, though!

This is the belly and loin of the Red Wattle.  This pig had been raised in a huge pasture that included an oak woods.  It had enjoyed a lot of forage and as many acorns as it could eat.  The fat was very firm and white and fairly plentiful.  The color of the loin is much redder and the texture firmer than the loin of the white pig.  This was true of the rest of the carcass as well. 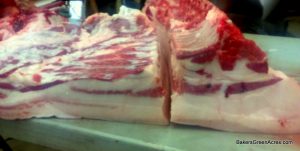 This is the Mangalitsa loin and belly.  He was fed a dry diet of hay and small grains for the last 120 days, but no acorns.  Note the deep red color and marbling of the loin.  The fat cap is exquisite on this pig.  The acorn fed Red Wattle had firmer fat, but the Manga had all the quantity you’d expect.  When we rendered the leaf lard, the Mangalitsa produced about three times as much as the Red Wattle.  The gal who brought the Manga made lardo out of most of this back fat.  Note the belly.  The other two had leaner, meatier bacon, but we’d be interested to have done a taste test (wish we’d have thought of it at the time).

The opportunity to compare pigs and carcasses like this is a first for us and was really enlightening.

We have Mangalitsa pigs by the half and whole available right now for you!  We’ll take them to the butcher for you and you can get them cut the way you prefer.  Let us know if you’re ready to fill your freezer with the best tasting pork in the U.S.!