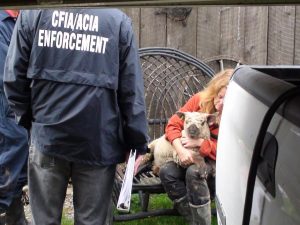 I was just introduced to another under-fire farmer.  Montana Jones lives in Canada.  She raises Shropshire sheep.  At least, she did.  Until the Canadian government decided that her sheep, despite their extensive, vitally good health history, might possibly at some time in the future develop scrapies.  Their solution was to “depopulate” the 44 pregnant ewes and others on the farm.  Montana’s genetics had been carefully preserved since the first Shropshire was brought over from England.  This action leaves only about 80-90 Shropshire ewes (purebred, registered animals) in all of Canada.  Her website tells the story: ShropshireSheep.org.

She makes a comment about the fact that all we’ll have left in the genetic pool are animals who fit into the industrial food model.  That struck a chord for me.  Wouldn’t it be nifty if all the animals fit nicely into a neat, large barn sized box. Hmmm…  Homogenized animals.

I talked with an ex-dairyman recently about Holsteins.  He told me that when he was a boy and even up until he changed careers 30 years ago, you could find white Holsteins, Holsteins with a wide variety of patterns and sizes, and they were noticeably smaller framed.  He added that now they all pretty much look the same and are huge.  “But, boy do they milk!”  They’ve homogenized the cows!  Interestingly, they’ve bred them so that the Holsteins actually can not survive and thrive on a grass based diet.  They need more protein, so a large amount of grain is required to maintain a healthy animal.  Our Jerseys are not so refined–they still do fine on just plain old grass.

We keep saying that Michigan’s “feral pig” law is a front.  Right now they say they are after Russian boars and all their cousins (you know, the “feral” ones).  But the way the law is worded, they have the power to go after any pig, any time, any where.  If you want to know if your pig may be an “old world swine” or a hybrid of a “feral swine,” you consult the Declaratory Ruling.  In there you read that if your pig looks like a pig, it’s a hybrid of a Russian boar, old world swine, etc. and is illegal.  What is clearly legal?  A white pig with a docked tail and clipped teeth who can’t thrive on dirt outside a barn.  The pigs must become homogenized.