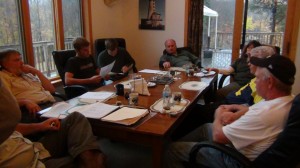 We finally hit the big day.  October 15.  It wasn’t raining when we got up that morning, which was a good sign it seemed to me.  We’d enjoyed good company over a good meal (I made Mangalitsa pork roast for everyone) the evening before.  We felt confident in our stategy and in our lawyer’s ability to communicate that to the judge.

The judge had made it clear he didn’t want a lot of testimony or “pontificating.”  The evidence was to be demonstrative and the arguments based on fact and law, not feeling, opinion, or conjecture.  All the briefs containing the argument and documentation had been before the judge for some time, so this limited how much more needed to be said.  The attorneys made their oral statements highlighting the important points.  The judge asked questions of both Mr. O’Leary (a good lawyer to have in your corner) and Ms. Yokum (a nice lady just doing her job).  There were rebuttal and closing statements.  Then the judge declined to hand down a verdict from the bench, giving himself 30 days in which to pen his decision.  And in about an hour and a half it was (almost) over.  The judge’s decision to issue his verdict later was a good thing.  Judge Solka is looking toward the Appellate Court and will take the time to write a thorough decision.  It seems unfair to have to wait longer, but the up side is that his verdict will be well thought out and reasoned and should be able to stand.

*The DNR is trying to distance themselves from the Declaratory Ruling.  They argue that the Invasive Species Order can stand alone and is clear enough.  When the judge asked them if, hypothetically since a criminal trial is possible with this order, he had to instruct a jury as to how to discern if a hypothetical defendant’s animals were legal or illegal how should he do that, they had to acknowledge that the Declatory Ruling is needed.  They also referred to 8 characteristics, ignoring the 9th item on the list.

*The DNR made a motion that the plaintiffs (us) didn’t have standing to question the DNR or it’s law because they had all, in one way or another, acknowledged that they have broken the law by possessing “prohibited swine.”  They made this assertion based on commercial advertising speach and politically critical speech (satire and educational youtube videos).  Mr. O’Leary pointed out that all of the parties are citizens and as such have the right to question the government in a court of law.  Additionally, one of the plaintiffs has never admitted to anything anywhere–she was sued by the state because of association with another plaintiff.  The judge dismissed the motion.

*Mr. O’Leary brought to the court’s attention that the DNR intends to use, according to the Declaratory Ruling, commercial speech (advertising) and political speech (satire or criticism in YouTube videos being the cases in point) as justifiable cause to search and seize property under the ISO.  This is a blatant violation of the 1st Amendment to the Constitution.  The judge seemed to grasp that the exaggeration of advertising is protected, as is political speech, and this point would be valid for discussion on another day.  Since the Attorney General’s lawyers hadn’t had a chance to consider this point it wasn’t argued at this time.

*It was noted that there was minimal security for the DNR’s people.  Shannon Hanna had a couple men with her and several others were noted on their side of the courtroom, but there was no where near the display at Ron McKendrick’s hearing in Cheboygan.  Our side of the room was packed with supporters from all walks.  We appreciated everyone who was there.  You’ve all been fantastic moral support all along and we appreciate it.

Thanks so much to all of you who have supported us in large and small ways.  The notes have encouraged our spirits and the donations have encouraged our lawyers and really enabled us to gather all the documents and evidence to make a solid argument.  (Truth is, our lawyers do enjoy the challenge on it’s own merits, but the money helps them do the research and put in the time to do the fantastic job they did.)  We will continue to keep you posted as things develop.