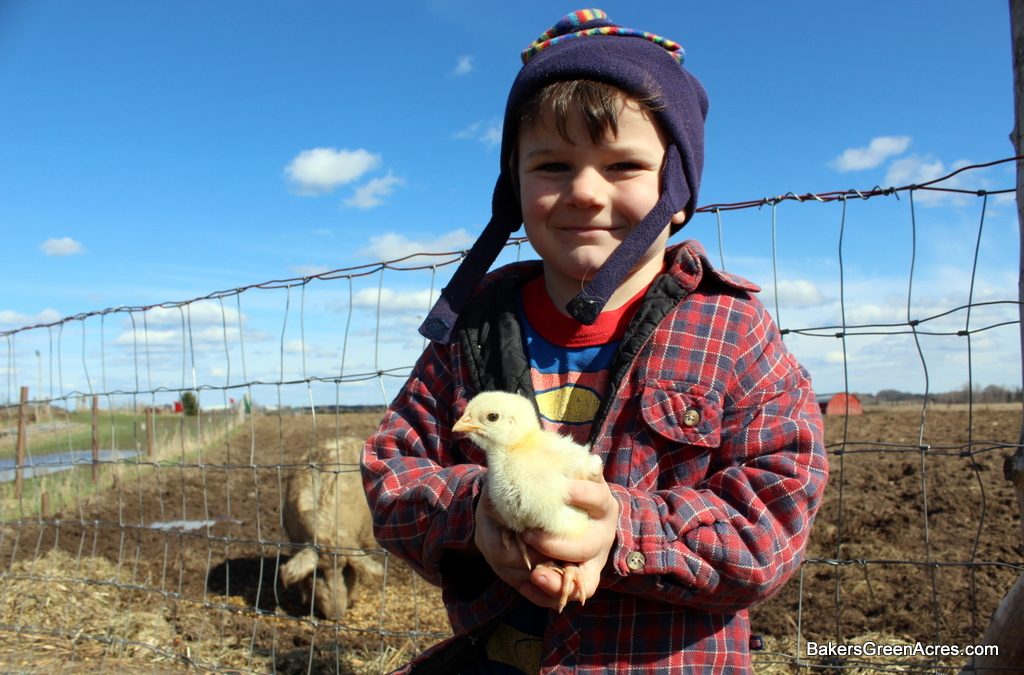 This week’s been busy.  Mangalitsa/Mangalica pigs, warm weather, layer and broiler chicks, shop construction, and business ideas have all been part of it–beside the usual hum of a family of 7/8 in full swing with school and general life on a winter farm.

Mangalitsa hogs is a topic you’ve probably talked with Mark about if you’ve talked to him in the last 3 weeks.  They’re known as “wooly pigs.”  In the fine cooking world in America they are rapidly becoming a “must have.”  These hogs are the antithesis of the lean, fast American cuisine bred hog.  They finish on a acorn/nut, no corn diet that builds tannin into their fat.  Tannin is a natural preservative so the fat will preserve better.  The nuts also make the fat monosaturated, where corn makes it polyunsaturated.  Monounsat. fat doesn’t go rancid for a long time, where polyunsaturated. fat does.  I know from rendering lard on the cookstove before how fast hog fat can go rancid.  Now I know why it was such a staple in the early part of the century before commodity farming, “the other white meat” breeding, and subsidized corn feeds became farming’s norm–and why those things have helped lard to fall from favor.  Mangalitsa’s are prime with back fat a few inches in depth (normally we want very little backfat), and as much marble as meat in the muscling.  The fat is a delicacy in itself, but the meat is made into specialty sausages and preserved meats that are aged up to two years, hence the reliance on the fat’s staying power and flavor.  That’s a drop in the bucket…more later.

We loved the break from winter.  In our school it was a mini “spring break” as the kids did what I call “triage school” (the basics got covered), and then headed out for some vitamin D.  Even Keith and Rachel spent a good deal of time outside, though Rachel decided shorts and t-shirt were still a bit light for clothes.  I think 3 year olds have a hard time understanding “dressing for the weather” and temperature.  All of mine as 3 year olds have wanted to stay in for the winter unless it looks like summer outside (in fact, Keith stated that as his intention and made good on it as much as he could).  As soon as it looked more like summer, they expected it to be summer and dressed to go outside accordingly.  But they grow up.  By the time they are 10 and 12 they do crazy things like knee boarding on a snowmobile pulled sled through the spring time pond in the field.  Yes, I have pictures.  Unfortunately, despite a visit to the repair shop this week, the computer won’t give them up to the website.  The boys got very wet, but had a great time.  This weekend they are camping out with some friends.  It was supposed to be a snowmobiling/sledding/iceskating winter party.  However, nature gave them lemons to work with, and they made some fine lemonade by coming up with the camping idea.  They have a army tent with a woodstove in it.  It keeps them warm just fine as long as they tend it.  I guess at 2 a.m. last night they had to start a new fire.  The process included climbing a birch tree to get bark for tinder.  We got 1-2 inches of snow last night, which makes for an interesting mental picture.  One boy made his way to the house in search of a sleeping bag–two army blankets weren’t enough for a Feb. campout.  They get smarter about preparedness every time they camp out!

Layer chicks arrive this week and broiler chicks are ordered for two weeks  from now.  It is exciting to start the brooder again–kind of like ordering garden seeds.  (Which I also need to do SOON.)  Even though we’re watching it snow today, we got a taste of spring and know it is coming and it’s time to get ready.  One thing we’re trying is a batch of roosters strictly for butcher–known as “heritage” chickens.  They can hit 4 pounds of bagged weight, taste so much better than the broilers, and are only a bit more chewy.  They will be raised on pasture but not allowed to range too far, so the meat should be fairly tender.   If you’ve never had one–try one this year.

The shop addition is now fully insulated and plastic vapor barrier lined.  It has a gas furnace in it that comfortably heats the outer and inner shops.  The guys have also made plans for streamlining the processing process when they set everything back in place.  Again, summer is coming and we are looking forward to a good year.

We were talking to a customer this week and she made the quotable quote for the week.  There are opportunities to be had, even in a tough economy like ours.  Industriousness and a willingness to try about anything are the keys to surviving.  At the small farms conference we observed, as did other seasoned attendees, that a large part of the sell-out crowd was people who are wanting to farm either as a business or just to feed themselves.  They haven’t done farming on a large scale or perhaps on any scale, but they see it as a direction to go in “in times like these.”  Interesting….

Keith tells me I’ve talked to you too long and it’s his turn on the computer.  He planned and hosted a “cake and cookie party” this week.  It was quite a success–we all enjoyed the bit of frivolity and fun.  Those are two keys to sustainble living, and kids are one way to be reminded of them!