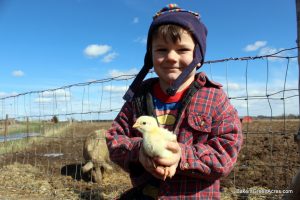 It’s a little known fact, but, to quote a little boy’s confession to Grandma, “Chickys really do like to swim.”

At least, one might think so when they get the opportunity so often.  Whether it’s a “pouring buckets” rainstorm, a broken water line, or a faucet forgotten “on”, the chickens seem to get lots of opportunities to try their aquatic skills.  Let it be known, chickens don’t swim well.

As I was on my way to town one evening this week to get bedding after the most recent flood, I thought about what it takes to make a farm work.  I was running for needed supplies, Joe and Sam were manning shovels with Mark, Rachel was helping me by entertaining Jim in the back seat, and Grandma was taking Dorothy to her evening activity.  Team.  Everyone pitching in when needed.  Sometimes it’s an emergency, sometimes it’s a get-it-done-quick situation, most often it’s just more-to-do-than-time-to-do-it-in that pulls everyone together.

I have to say, biased though I am, that we have a good team.  There aren’t really any jobs on the farm that any given person won’t do.  Some are better suited to certain jobs than others, but that’s the nature of “Team.”  We know a couple of other small farm families and they operate the same way: Team.  Of all the books about farm families through time, it’s the same component that makes a family farm work: Team.

I think large farms miss out on that.  There are so many employees that the family doesn’t operate the farm.  They may or may not even live on the farm.  Certainly the children aren’t called on to rise above to meet a challenge that could be crucial to the family’s well-being in some way.  There’s something inspiring about that, whether it involves a plant crop or an animal.  It has potential to bring out the best in us, or at least offer a significant learning opportunity.  Another reason to stay away from industrial farming, in my mind.

So, we saved the chicks.  We stepped back and looked at each other.  We nodded our tired heads and said, “Good job everyone.  Thanks for the help.”  Go Team!!